Slowing things down a bit.

Thursday was a right off and we had guest around on Friday. Saturday was looking good for a couple of hours work but a last minute distraction came along.

The same thing started today but I was able to get to the layout.

The first task was more cobblestones. The second rail for the crane was put in as well. 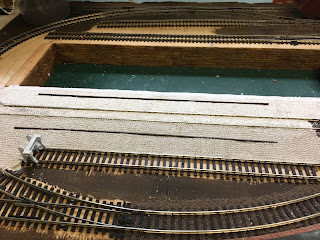 I repainted the work station for the operator too.  I thought that blue might be nice. I was wrong. No photos of that bit of scariness. Brown will be my next attempt.

The next thing was to think about what is going on at the back of the layout with the fuel depot. Years ago at a Hurstville exhibition, I bought a Walthers kit mainly for the tanks. The kit was never completely built as circumstances changed. Like all good modellers I hoard old kits - just in case. Today was just in case. I reckon that I can use the building as a very low relief kit and add a couple of ends of tanks lying on concrete supports. Sort of like this. 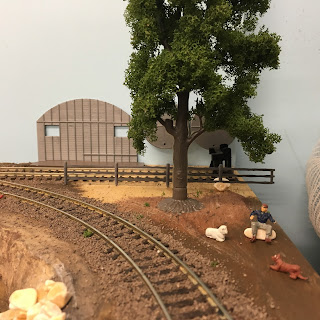 This will also give me room for a swagman and a jumbuck. Here's what it looks like with a tanker. 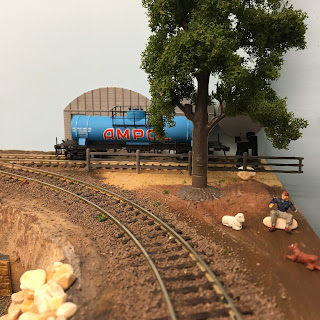 It's a micro layout so things are tight.

The other thing that I did today was to play around with static grass. I bought a cheap applicator of an internet auction site. The instructions are hilarious as the translation is woeful. However heed the warnings. I messed up. I have no idea what I did, except that I did not switch it off properly. The jolt was like being punched in the chest. It's hard to believe that could come from two D cell batteries. I did not get super powers.

I mixed in three different shades of Woodlands Scenics grass but when I shook them out it ended as a consistent colour. 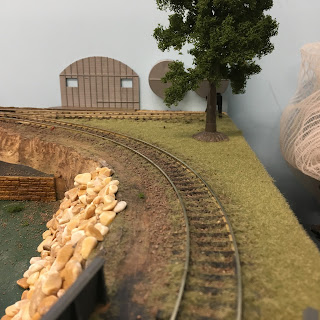 There was a bit of spillage onto the track but that should be able to be vacuumed up carefully tomorrow so that I can collect the fibres.

I want to keep working on the rear of the layout as I am finding that I am leaning over the front too much.

Until tomorrow night. I reckon there will more grass and greenery about.
Posted by Tom at 00:43