I stopped and had a review tonight before I started.

This is week 1, right at the start of the 15 minute challenge.

Quite often I think that I'm not achieving too much but realistically I am.

I took a few photos with my proper camera and not the phone. However, I've changed my laptop and have not been able to transfer certain imaging software across to my working device. (That's the next job tonight.)

After the pics, out came the vacuum cleaner. The layout looks much cleaner now.

Here's the section I did yesterday with the excess grass removed. It's a good example of before and after the static grass, with my swagman sitting on a rock. I have better rocks which look more appropriate. I want to add some fallen branches and a campfire too. And I'll need to paint him. The swaggie is a figure from the Preiser range and originally is a cyclist, however, I've bent his arms and legs. 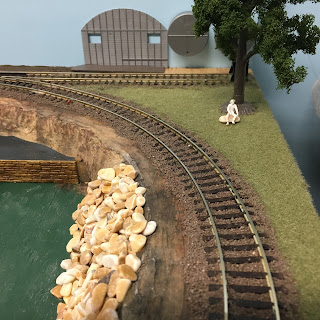 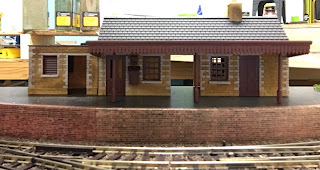 Yesterday I said that I would focus on the rear of the layout before the front. However, I couldn't resist seeing what I could do with some of the static grass areas which I put down last night. Out came my old box of scatter material. There are a few different shades of green here.

This is the head shunt for arriving trains. It also doubles for the cattle yard. The loading platform will be built later. To the right is a bit of a throw back to the days of old. I have used lichen. Is that still fashionable? I don't think that it looks bad. It's a nice colour and hides the edge of the cliff edge. I also need to paint the framework and sides of the baseboard to make it look prettier. May be this weekend. 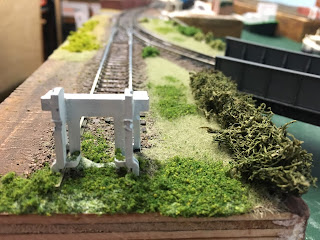 The last image is of the dairy. The paintwork needs finishing. It needs glazing and behind the windows I will stick black paper. Signs need to be added and then it will be glued to the back board. But before that happens, I'm not sure if I want to paint a back scene across the back. I'm feeling that I will need to create a study of this. A couple of fences around the industries might help too.

I also want to create and shelter which will protect the loading platform and go across the track. I could put a light or two in the shelter for night time shunting. 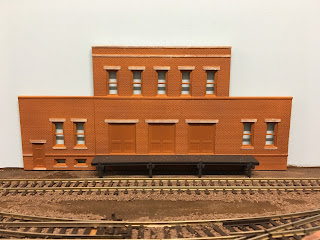 Tomorrow's plan? Finish the paintwork on the dairy.