I was talking to a mate today and he said that it would be good to finish my layout as not many layouts get finished. Is a layout ever finished though?

My plan for finishing by 26th April won't come into fruition. This is because of the way that I want to add the water. I'm going to use Mod Podge. I've used PVA before and built it up with layers. I've seen demonstration using Mod Podge on the internet. At the Forrestville Exhibition in March, one of the exhibitors said that he thought it had a better shine than PVA. The tutorial suggests that all of the scenic flock stuff be sorted out first and then add a layer of Mod Podge every day for ten days.

That's going to make me miss the deadline.

I'm not too worried though. I've been marching on regardless.

The easiest thing to sort out was the cattle dock. I decided that one of those English styles on a platform would be good. The cattle dock is one bogie wagon long and about an inch wide. 2.54mm isn't very wide. There have also been some mention of late in the US modelling press about how useful it is to model a cattle yard on the edge of your layout. This was my plan for this siding all along. The platform offers protection for the BCW from the big abyss and floor. I used a bit of timer from an old control panel which was the right length, some tarmac and brick paper previously downloaded from Scalescenes and some fence which were part of a job lot donation which someone was giving away on Facebook. The cows came from the same lot as well. They won't be there all the time. 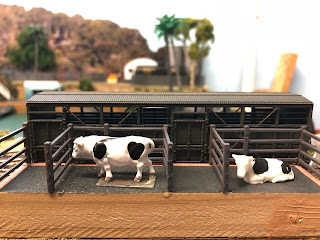 The interior of the station building is sort of complete.

The walls were painted and then glued together. The bit on the left is with the painted middle layer to provide a door. The bit on the right is before it gets assembled. I found some ole travel posets online and reduced them to an appropriate size.

Lights were installed but not hooked up. A couple of people were added to the station - one in the waiting room, one buying a ticket and a station master selling a ticket. The whole thing was lightly glued into place. 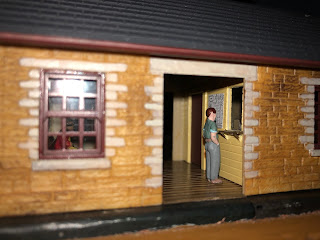 The next task was to put in more lights on and then make them work. 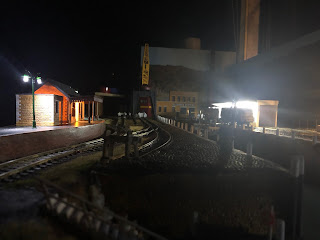 There was one other problem too... 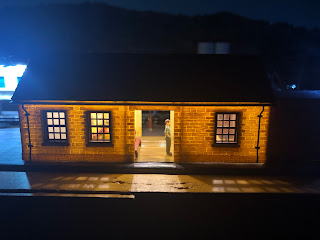 It's a rookie mistake but the paint doesn't block out the light so it comes through the plastic walls. I'll need to paint the interior with some of the Railey cream paint. I also didn't add too much detail to the interior of the station master's office as you couldn't see much. With the lights on, now you can. This will need more work.

With the lights working, the swaggy can now boil his billy.

The fire is a tea light candle LED. A regular exhibitor at exhibitions, Ian Williamson, told me this idea. He'd placed one inside a 44 gallon drum with holes drilled into it. The effect was good and cheap to create.