The Story of the Pink Pig 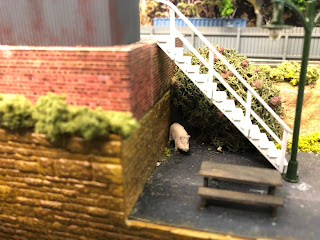 Lindsay was a member of our model railway club years ago. He was an architectural model maker and ran a workshop on constructing models with styrene. I have to say that from one afternoon, I learned a lot from him. He was a great bloke to have around and he was pretty supportive of other modellers.

He had built a narrow gauge layout for our club's annual exhibition and it was designed in such a way that it could fit at an angle into his Toyota Camry, with some good padding around the sides. As our club's exhibition had spotter questions for kids to find stuff on layouts, Lindsay decided to hide a pig under a goods platform on his layout, he'd even asked his daughter for advice. His spotter question was, "Where is the pink pig?"

You can probably work out from the past tense used above, things don't end well for Lindsay. He came home from work one afternoon feeling tired and had a sit down on the couch. He nodded off and never woke up.

That year, all of the club members displaying layouts put a pink pig on their layout, along with the spotter question to match.

Over the years I've displayed a number of layouts at our club's exhibitions and all of them have had a pink pig on them somewhere. It's just a small thing to remember an old mate. It just seemed right to put a pig on this layout as well. If you see him in some of the photos in future posts, you'll know why he is there.