Last Tuesday, I had a fun day out with a mate. We had a ride on the Georgetown Loop Railway, west of Denver in the Rocky Mountains in Colorado. It's a short narrow gauge line which winds its way from Georgetown to Silver Plume only a couple of miles away but there is a fair rise in elevation. Silver Plume is 2790 m above sea level. That is an extra half a kilometre on top of Mt Kosciuszko.

Our train was hauled by loco 111 seen below running around it's train at Georgetown. We had travelled over the bridge in the background on the way down. 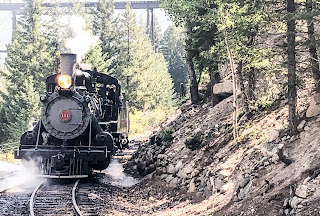 On our way back to Denver, we stopped off at Golden to visit the Colorado Railroad Museum. Downstairs in the main building is a model railroad by the Denver HO Model Railroad Club.

Our final stop was Caboose Hobbies, not too far out of the way back to Denver. It was a nice way to end the day. While I was there, I considered buying a couple of items as a way of a souvenir of the trip. Something which I could stick on my layout to remind me of a good day out on the other side of the world.

I admit that I seriously considered a Bachmann Climax with DCC already fitted. If I had a guarantee that it could handle 9 inch curves I probably would have bought it.

Instead I settled on some Woodland Scenics people. HO scale people smuggling takes up less space than a locomotive and is a lot cheaper.

After checking out the different possibilities, I found a small scene of a boy holding up a fish walking to his proud mum, with his dad walking behind him after tying up the boat. I knew a good spot at the marina for this scene. Here it is. 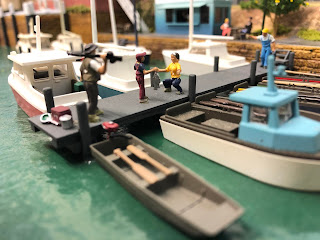 I had to move a couple of other figures around to fit them in but that was a fairly painless task.

I reckon that these souvenirs are a little more fun than trinkets which take up space on a bench next to your telly. Now all I need to do is to find a spot for my Amish carpenters from Pennsylvania.