In answer to what goes inside the Fine Fish loading shed, here's the answer. 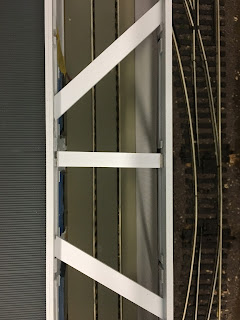 I have put some concrete down inside. I image was taken using an iPhone and the tracks which look like they are entering the building miss it... not by much though and clearance is tight.

The outside strips of styrene were glued down without fuss but the centre strip between the tracks needed a bit of help for a heavy object or ammo box. 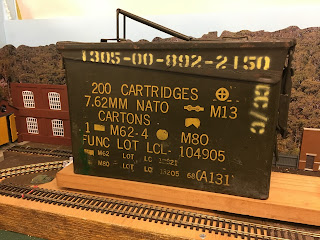 Underneath the wood is a brass square tube lying on the plastic.

With that job done, it was time to fit the building. 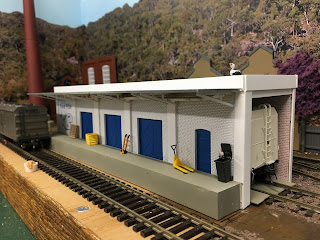 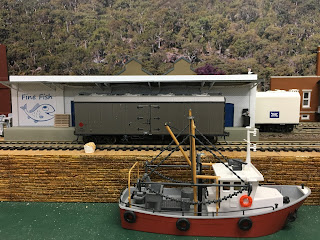 In the top image you can see an LED strip. This was wired up and stuck in place. It is a little less obvious now. I spent a fair bit of time on Thursday night fixing up inner end of the building. It was a little out of square. I needed to replace a bit of styrene angle and tidy up the brick work. Once done, I hit it with some white primer. I used too much and had to wipe some off which removed the exisiting paint. I figured is gives it a worn look and I'm not worried about it.

It's now being glued into place, being held down by a bit of wood and an ammo box.

Another job this week was to sort out a nasty gap between the bakery and the backscene. 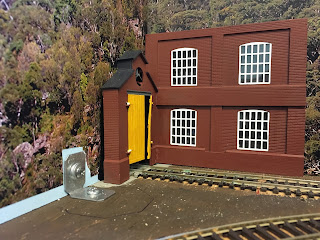 I straightened the wall a bit and played with a Faller chimney which I had bought once as it might come in handy. 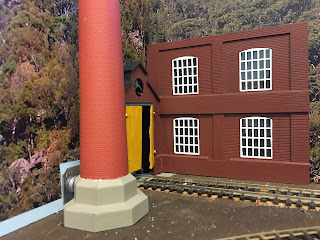 The chimney needed to attach to something like a boiler house or a furnace. 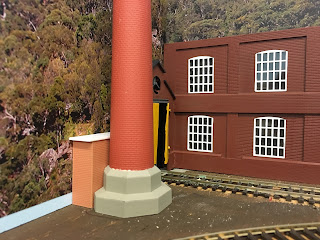 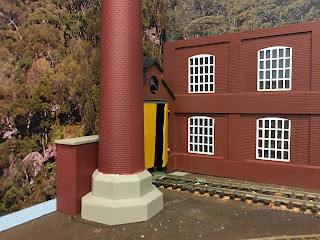 The gap is gone!

Jobs for the week. (Because a list can keep you focused.)
1. Ballast the bakery siding.
2. Add cobblestones to the other side of the wharf.
3. Put a fence up from the bakery to the next building.
4. Put up a fence or a hedge between bakery and the other unknown industry.
5. Plant a tree next to the bakery to disguise gap on the inner end of the extreme low relief building.
6. Think about the next building. Probably a warehouse.
7. Put down some static grass.

I think that I have a clear week, which means I could get through some stuff.