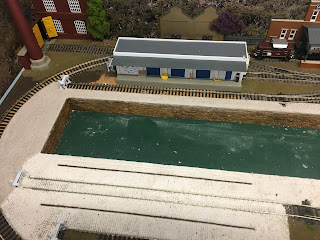 This week has been a lot of this and that. Today's effort was putting some more Das modelling clay down into cobblestones. Although from what I hear, cobblestones are round whereas square or rectangular stones are setts.

I've had the Das open for 14 months. So long as you keep it wrapped in an airtight condition it still seems to work. I did find that dipping a finger in some water helped a little though. I have the section between the tracks in front of Fine Fish and to the left of the building still to go. After that, I have between the curved track and up to the backscene and the warehouse to go. The curved track will be more challenging than the straight track as the wheels will need more space for clearance. Once done, I can paint the cobblestones.

Earlier in the week I carried on with some ballast. Now all of the track is ballasted. 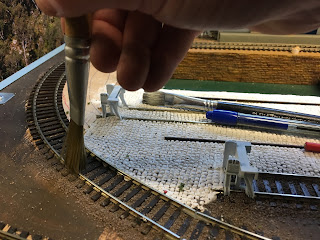 Once the ballasting was completed a bit of static turf was put down. Part of this was easy but some sections close to the backscene were difficult to put the grass down. A lot landed on rooftops. Instead of shaking it out of the static grass applicator, I had to sprinkle it on by hand and then wave the applicator over the top as close as I could. Behind the Fine Fish, in a spot where no one will actually see it, the applicator wouldn't fit at all. However the end result is not too bad. 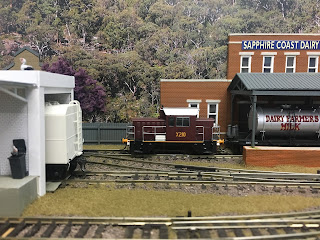 The fishery building, as you can see is narrow. The idea is to give an impression of what should be there. On this micro layout there isn't enough room for a complete building so compromises had to be made. The main aim for the layout is for operation and on the two sidings I want to load four refrigerated vans.

For the coming week I've a couple of jobs.
1. Put up a couple more fences.
2. Create a sign for the bakery. I'm thinking about a billboard style on the roof.
3. More cobblestone setts.
4. Start on the warehouse.