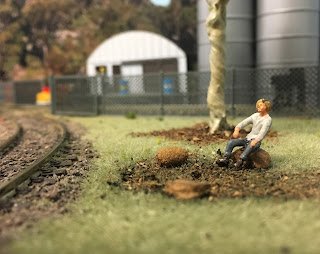 My swagman is setting up camp. Originally he was a Preiser figure intended to be riding a bike. However, he had a suitable hat and I could bend his limbs a bit. He is very close to the railway but he hasn't got much choice. Just out of frame, the flat world ends and he could fall into the abyss. He is quite brave really.

The campsite is made from a couple of pebbles which I had scrounged from a bit of exposed dirt at work years ago. The blackened ground had the static grass rubbed away, some wood ash applied and some ground sticks and leaves rubbed in.

He is sitting by a 6mm hole. I need to wire up an LED from one of those tea light candles and glue it in. Then I can build up a fire around it. I'll need to include an HO scale billy. I need a swag for him and, more importantly, he'll need a jumbuck stuffed in his tucker bag.