Not Quite 'The End' 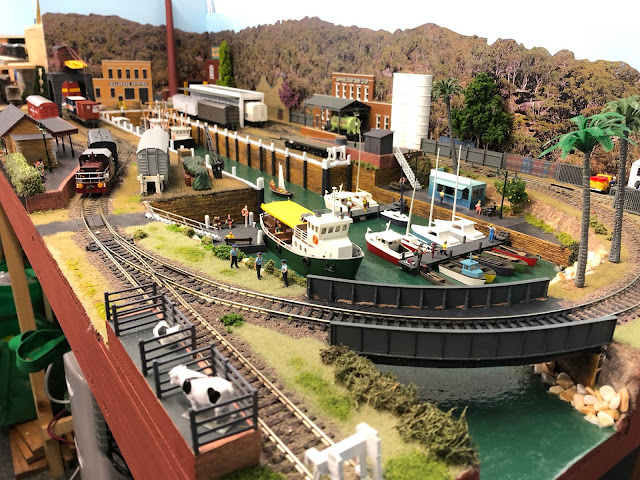 The saying goes "All good things come to an end." Sadly that is the case for Billabong Marina.

In February 2019 we had a storm which flooded the train room. Not a big flood, just enough to cover the floor, ruin the carpet and most of the furniture. A month later and the main layout was covered in mould. Nasty green grey mould in places that I could see but not clean. Billabong Marina survived and it was used as a temporary train running layout while its extension was rebuilt. Then it lived under the new layout  -  there would be no place to attach it to the new layout as more space for people was required.

Mould was found in January 2022 and cleaned off. People reading this in Sydney in March 2022 would not be surprised to find the mould back. The room hasn't flooded but every bit of unpainted plywood in the room showed mould. All of the ply was bought in October 2020 to January 2021. Except for the little layout. I haven't had a good look but the old school desk it is resting on is green instead of brown.

As I'm allergic to mould, (found this out twelve months ago) its time is up.

The new layout has no space for it. It's included most of the elements of the original large layout but no spot for an add on.

However, there is a harbour area - no room for water or boats as I have crammed in as much as I can for operators - an I can put a little station in. The dairy can be a cold store. I won't need to make another crane. The fish wharf already has a new place. The harbour has a different name based on a south coast location but I like Billabong Marina so I'll change the name of the town on the layout.

I have really loved the little layout. It gave me some respite with my 15 minutes a day mantra during a really stressful period of work. I am grateful to James McInerney for asking me to write articles for the Australian Model Railway Magazine and I hope that I have encouraged others in the hobby.

If you're new to the blog, check out the older posts as the little layout developed.

Thanks for coming along for the ride.